Dzielić
Follow the sacred trail of silver beams
And walk to me, O favored son
Earthling made of stone
Until the star lights cease
I'll be your servant eternally
And I'll bow before you, arch of the solar king


Thunder awakens the waves!
Surging from the crashing waves of distant shores
Solemn strain of the divine
Great circle of light, sanctified
Rising mythical carvings of giants
Eternally engraved in the western sands of old
zdjęcia 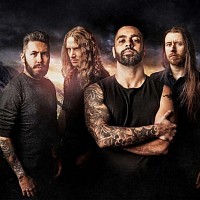 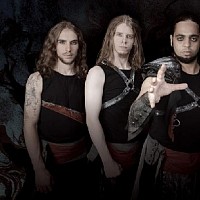 O Great Father! Of the sun and moon, the earth and skies
Divinity of the stars, fate spinner, time bender
Silence speaking the voices of worship
The arrows of war flying through the sacred mountains
Hanan!
Striving to its will
Striking the lightning on the mortals of the earth
Hidden stones below
Carvings of giants engraved in the realm of men
Anger of the Gods
It's time for you to rise again
Breathing life into stones of old
And in these darkened times you'll reign
Flooding the realm of men with tears of rain
The rise of night will chase away
The light of the sky to hide in its wake
And if we find ourselves astray
The light of the scepter will guide our way
Emblem of power and might
Leading where water meets the sky
Saviour of thousand lives
Bringer of restful times